Skip to main content Skip to navigation
Posted by jason.sprott | May 6, 2019

Stripe Rust Was Found in Lind, but not in the Palouse Region

Last week, we were planting spring nurseries and recording the first set of stripe rust data in winter nurseries at Mount Vernon (Skagit Co.) in northwestern Washington.  Winter wheat plants were at Feekes 5-7 and barley plants were at Feekes 6-7.  Stripe rust reached 60-80% severity on susceptible wheat varieties and 20-40% severities on susceptible barley varieties.  These levels of wheat and barley stripe rusts are normal for this time of year in this region.

When we came back on April 26, we were checking winter wheat fields along highways 2 and 21 in Douglas, Lincoln, and Adams counties.  Wheat plants were at Feekes 3-6.  No rust was found in any checked commercial fields, but stripe rust was easily found on susceptible wheat varieties in our disease monitoring plots at the Lind Experimental Station (Figure 1).  All rusting leaves were the first and second low leaves, indicating that the infections occurred before the winter and the pathogen survived the cold February.

Yesterday, I was checking wheat fields around Pullman, and did not find rust.  Last year, we first found stripe rust in our experimental fields of the same locations on May 7.  This year, stripe rust could start later in the Palouse region, based on our forecast in March and the rust development situation so far in eastern Washington.

The previous general recommendations are still good.  Early season application of fungicides may not be needed, especially for fields grown with resistant or moderately resistant varieties.  It is always a good idea to check fields and apply fungicide when stripe rust is found. 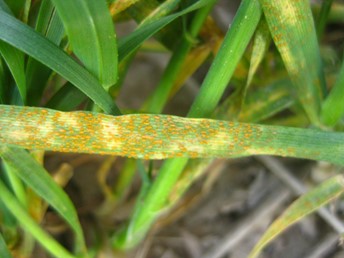