Stripe Rust is developing in experimental fields in the Palouse region

This morning, I was checking fields in the Palouse region.  Winter wheat was at boot to heading stages (Feekes 10-10.3).  Stripe rust was found in all of our experimental winter wheat fields around Pullman, WA (Whitman Co.) (Figure 1).  Rust appeared in small foci of mostly 5-10 stems, except one row entirely infected.  Most foci had rust on leaves from bottom to flag leaves, indicating that rust has been developing from over-wintered fall infections.  All observed rusts were on the susceptible check (PS 279), and no rust was observed on any other varieties.

The rust level is much lower than that of the last year.  By this time of the last year, stripe rust became uniform throughout the experimental fields and the susceptible check reached 100% infection (all leaves had rust) and over 90% severity (leaf area covered by rust).  The current stripe rust pressure is still low.  However, stripe rust may develop little bit fast over the next two weeks, as the weather conditions have been favorable for rust infection.  It is better to check fields grown with susceptible or moderately susceptible varieties (stripe rust ratings 5-9), and apply fungicides when rust is relatively easy to found (3-5% leaves with rust). 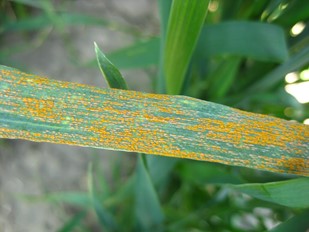 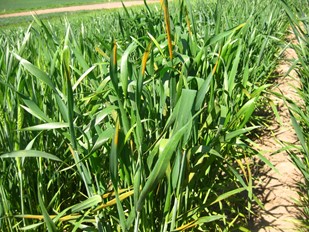