During our field survey on July 9 in Whitman, Garfield, Columbia, Walla Walla, and Astotin counties of Washington and Nez Perce and Latah counties of Idaho, winter wheat ranged from milk to mature.  Stripe rust was found on green plants in some winter wheat fields, but at very low levels.  Spring wheat ranged from heading to milk stages and stripe rust was hard to find in most of the fields checked.  In two fields of Genesee (Latah County), Idaho, leaves with single stripes of rust were relatively easy to found, but the incidents were still below 1%.  No stripe rust was found in checked commercial spring barley fields. Except for late planted fields in high elevations, the stripe rust season is basically over.

Other rusts in the Pacific Northwest

We completed rust data collection in our winter and spring nurseries of both wheat and barley at Mount Vernon (Skagit Co.) in northwestern Washington on June 26.  Both stripe rusts of wheat and barley were as severe as in past years.  Up to 40% severity of leaf rust occurred on few winter wheat germplasm lines. No barley leaf rust was found, which was very different from severe leaf rust situations in the same location in 2015 to 2017.

Stem rust was found in winter wheat nurseries in both Pullman (Whitman Co.) and Central Ferry (Garfield Co.).  In our experimental field near Pullman, two separate spots of stem rust occurred on a single cultivar (Rosalyn).  Each spot had 3 to 5 stems and leaves rusted (Figure 1).  In the Central Ferry field, stem rust pustules were found on one or two stems or leaves. 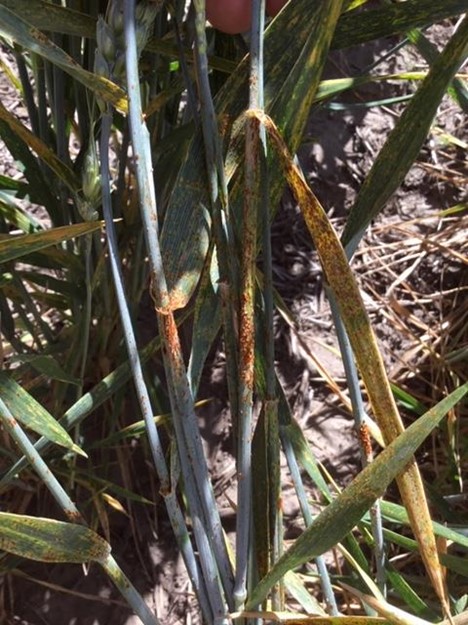