Skip to main content Skip to navigation
Posted by jason.sprott | May 18, 2020

This week, we were eventually able to travel to Mount Vernon (Skagit County) in northwest Washington to finish the first note-taking of stripe rust in winter nurseries and planting spring nurseries.  The activities were about two to three weeks later than usual.  Winter wheat ranged from late jointing (Feekes 9) to headed (Feekes 10.5) and winter barley from headed to beginning of flowering (Feekes 10.51).  Stripe rust reached 80% to 100% severity on susceptible winter wheat and up to 40% on winter barley (Figure 1).  As stripe rust of wheat is severe every year in this location, the observed rust level is normal. 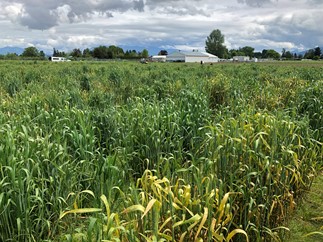 Stripe rust was first observed this year on susceptible winter wheat in our experimental plots in Lind (Adams County) in central Washington this week. Wheat plants ranged from late jointing (Feekes 8) to boot (Feekes 10). Stripe rust started from the low leaves and slightly developed to upper leaves (Figure 2).  Rust incidence was less than 0.1%. 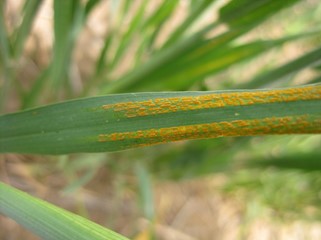