Based on the predication models using the weather data from November 1, 2020 to February 28, 2021, wheat stripe rust is forecasted to be in the low end of the normal epidemic level range (20-40% yield loss) in the 2021 growing season.  The models predicted highly susceptible varieties to have 22% yield loss.  This number is lower than the 39% forecasted in January based only on the November-December weather conditions.  The difference is due to the cold temperatures in February.  According to this prediction, susceptible and moderately susceptible commercially grown varieties will likely have up to 16% yield losses, or 5% yield loss on average for commercial varieties.

Stripe rust has not been found in eastern Washington

So far, stripe rust has not been found in fields of eastern Washington.  We checked wheat fields in Whitman, Adams, Lincoln, Grant, and Douglas counties on November 9, 2020 and these counties plus Garfield, Columbia, Walla Walla, and Franklin on March 9, 2021, but did not find any rust.  Thus, stripe rust will likely to have a later start than the last year in the eastern Pacific Northwest.

As stripe rust has not been found and the disease pressure is likely low in the early spring, fungicide application is not recommended in the early growth season for winter wheat, unless stripe rust is observed in the fields.  Although the stripe rust pressure will be likely low for the entire growth season, growers should choose resistant spring wheat varieties to plant, as rust may develop rapidly in the late spring and early summer when weather becomes favorable to the disease.

Although we expect that stripe rust occurs in western Washington as always, stripe rust has been reported so far only in Louisiana.  On January 27, 2021, Stephen Harrison found a stripe rust hot spot covering a good bit of one plot in his breeding nursery in Winnsboro (northern Louisiana).  On February 2, he reported stripe rust occurring in three stations, and on March 15, he reported unusually severe stripe rust in southern Louisiana he has never seen before (Figure 1).  The cool weather so far has allowed stripe rust developed rapidly in the southern part of the Great Plains, which has likely provided and will continue providing spores northward and eastward for infection in the Great Plains and eastern states. 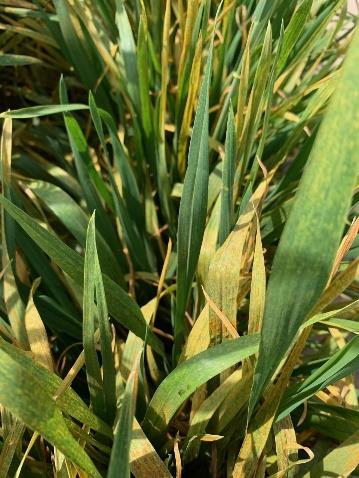