This week, we were taking the second-time stripe rust notes of the winter cereal nurseries and the first-time notes of spring cereal nurseries in Mount Vernon (Skagit County) in western Washington.  Winter cereals ranged from boot (Feekes 10) to flowering (Feekes 10.5), and spring plants were in early jointing (Feekes 4-5).  As usual this time of year in this location, stripe rust was very severe on both winter and spring susceptible wheat varieties.  Severities reached 100% on winter wheat (Figure 1) and 80% on spring wheat of susceptible varieties. Although stripe rust was less on barley, severity was up to 80% on susceptible winter barley and 40% on spring barley. No leaf rust was found on wheat, but barley leaf was observed on a couple of winter varieties. 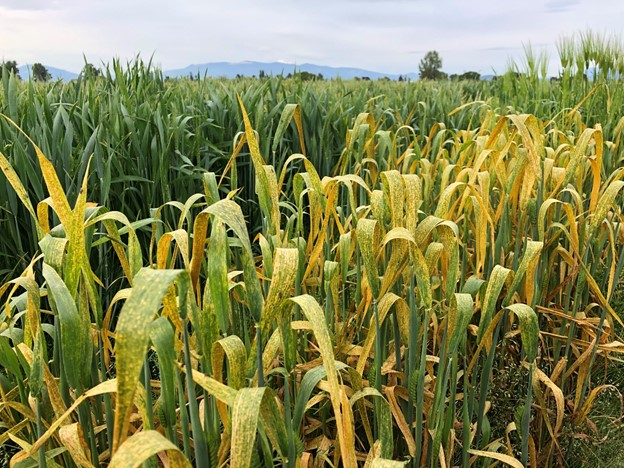 Yesterday, we were checking wheat fields in Grant, Adams, and Whitman counties. Winter wheat ranged from late jointing (Feekes 9) to heading (Feekes 10.1).  Most fields appeared dry, and no stripe rust was found.  In experimental fields around Pullman, stripe rust has not developed any further since the last observation of one small spot in one of the locations two weeks ago, and no rust was found in other locations.  This is the lowest stripe rust level of this time of year over the last many years.  Rain is needed for good crops.

As the stripe rust pressure is very low, fungicide application is not needed in eastern Washington, except for irrigated fields grown with susceptible varieties.