The winter wheat experiment, consisting of 23 varieties recently grown in the Pacific Northwest (PNW) plus a susceptible check (PS279),  was conducted on the Palouse Conservation Field Station (PCFS) to determine yield losses of the varieties caused by stripe rust and their responses to fungicide application for control of stripe rust.  A similar experiment with 23 spring wheat varieties plus a susceptible check (AvS) was conducted at the Spillman Farm.  Both fields are near Pullman, WA without any irrigation and under natural infection of the wheat stripe rust pathogen.  The experiments were in a randomized split-block design with four replications.  The winter field was planted on October 31, 2019 and sprayed twice (on May 28, 2020 at Feekes 8 and on June 11 at Feekes 10.1) with 14 fl/oz Quilt Xcel only for the Spray plots. Stripe rust was 1% severity in the susceptible check plots at the first application. The spring field was planted on April 27, 2020 and sprayed once (on June 18 at Feekes 6) only for the Spray plots when stripe rust was 1-2% severity on the susceptible check.  Stripe rust severity was recorded four times from the first fungicide application or the only application.  In both fields, stripe rust developed to 100% severity by flowering stage in the non-sprayed susceptible check plots.  Based on the four-time severity data, relative area under the disease progress curve (rAUDPC) was calculated for each treatment (Spray and No spay) of each variety.  The mean rAUDPC value of the No spray plots indicates the resistance or susceptible level of the variety to stripe rust, relative to the susceptible check.  The difference in rAUDPC value between the No spray and Spay plots indicates the fungicide effect on stripe rust reduction.  The differences in grain test weight and yield between the two treatments indicates stripe rust reduction in test weight and yield, respectively.

For winter wheat, stripe rust reduced test weight by 16.2 pounds per bushel and yield by 62.4 bushels per acre (48.6%) for the susceptible check (PS279) (Table 1).  The yield loss is very close to the 48% forecasted in early March.  The yield losses of the commercially grown varieties ranged from 1.2 (0.7%, Bobtail) to 52.4 bushels per acre (35.7%, UI Magic) at the average of 17.4 bushels per acre (11.6%).  Fungicide applications increased yield from 0.7% (Bobtail) to 55.4% (UI Magic) with the average of 14.3% for the commercially grown varieties.  Based on the yield loss data, 4 varieties (Bobtail, LCS Drive, SY Ovation, and Madsen) were rated 0 (no significant yield loss and fungicide is not needed), 12 varieties (Keldin, Skiles, SY Clearstone 2CL, Puma, LCS Artdeco, WB1529, Northwest Tandem, Bruehl, Northwest Duet, Curiosity CL+, ARS-Crescent, and Otto) rated 1 (yield loss close to significance and fungicide may or may not needed), and 7 varieties (Jasper, WB 528, Mela CL+, ORCF-102, LCS Jet, Eltan, and UI Magic) rated 2 or higher (yield loss significant and fungicide is needed).

Table 1.  Mean stripe rust relative area under the disease progress curve (rAUDPC), test weight, and yield of fungicide-sprayed and non-sprayed varieties in the winter wheat yield loss nursery on the PCFS farm near Pullman, WA under natural infection in 2020 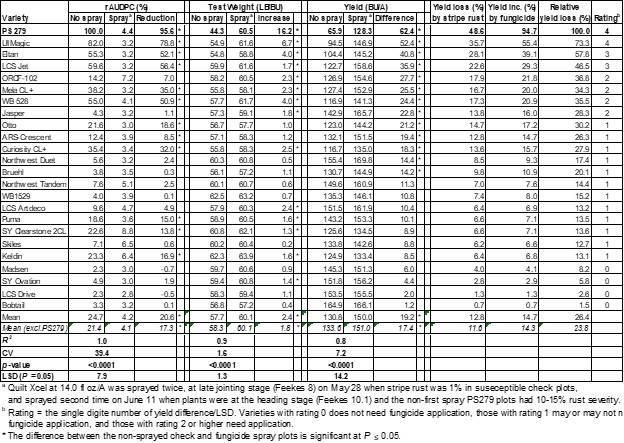 Table 2.  Mean stripe rust relative area under the disease progress curve (rAUDPC), test weight, and yield of fungicide-sprayed and non-sprayed varieties in the spring wheat yield loss nursery on the Sillman farm near Pullman, WA under natural infection in 2020 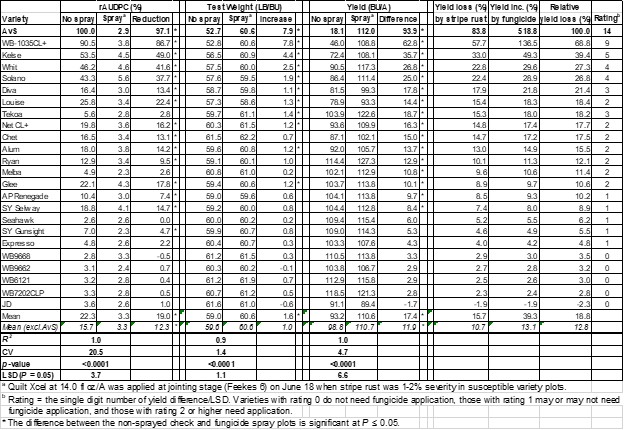